I have been lending money on Kiva for almost three years now and I have seen just 2 defaults out of the 460 loans I have made so far. I am pleased these results, but the last loan default irks me a bit. In February 2013 I lent $50 to Fernando in El Salvador as part of a $350 loan so he could buy fertilizer, pesticides, and seeds for his farm. Fernando seemed like he was an honest individual and making progress toward becoming self sufficient since this was his second loan on Kiva. In addition, the field partner PANDECOMSM had an above average rating of 3.5 stars. Finally, I like making loans to people who are generating a product that is needed by the community like farming and agriculture rather than those who are simply buying and selling candy bars, soda, and snacks like the plethora of loans requested in the Philippines.

The funds were distributed in February 2013 and due to be repaid in October 2013. The date came and went without any payments being made toward the loan, nor did I receive any communication from Kiva regarding Fernando himself. I often receive emails from Kiva updating me on successful loans and what the borrower did with the funds. I enjoy reading these emails because that is more or less the only feedback you receive on what good the money you lend did for the borrower and community. In the case of this loan however, it simply received an email in April 2014 stating that my Kiva loan defaulted and I received $0 payments. Here is a screen shot of the email I received. 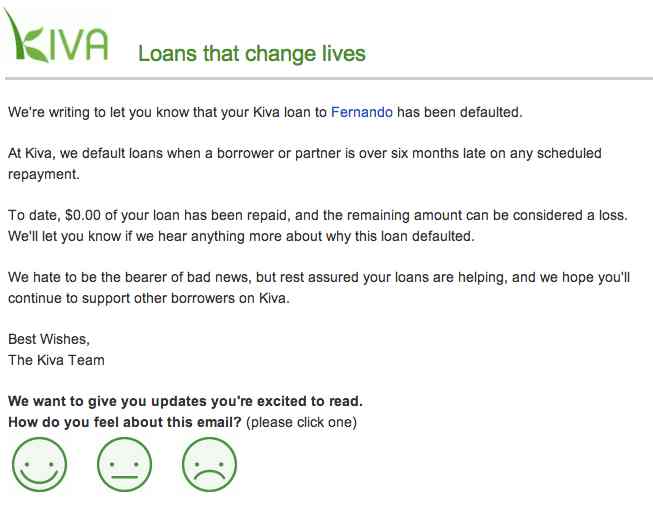 Thoughts On My Kiva Loan Default

I think microfinance itself is risky because many of these borrowers have little to no credit, no bank account, and there is no system in place to determine loan risk before you disburse the money. Kiva does indicate whether there was “due diligence” done before the loan was made, however I have no idea what this entails. Is this simply a verification of the borrower’s business and home address? In my mind the only thing you can rely on to determine risk is the field partner’s rating, delinquency rate, and default rate (you can actually filter loans by these metrics in the “advanced options” on the left side of the lending page).

While I am not angry that my Kiva loan defaulted and that is a risk that I accept by participating in microfinance lending, I am slightly concerned that not a single payment was made and Kiva did not provide any explanation as to why that occurred? Did the field partner lose contact with the borrower? Did the borrower declare bankruptcy? Did a natural disaster wipe out the borrower’s farm and stock?  I think that an important part of helping people in developing countries establish self sufficiency is to not only provide them with capital, but more importantly to teach them the skills to produce a product and run a business. A wise person once said:

If a borrower defaults on a loan, I would hope that they learned from a bad decision that was made and could build upon that learning to improve and become more successful later. I suppose I am asking for too much, but I do hope that eventually lenders can learn not just about the successes, but also the failures and how the borrower learned from their mistakes. I have always believed that successful people will fail once in a while and if you are not, then you are not pushing yourself hard enough.